This tropical table setting brings to life the exotic and favorite characters, the feelings of excitement, danger, romance and love conquering all that is Broadway’s, South Pacific. Transport your guests to another era and another place! 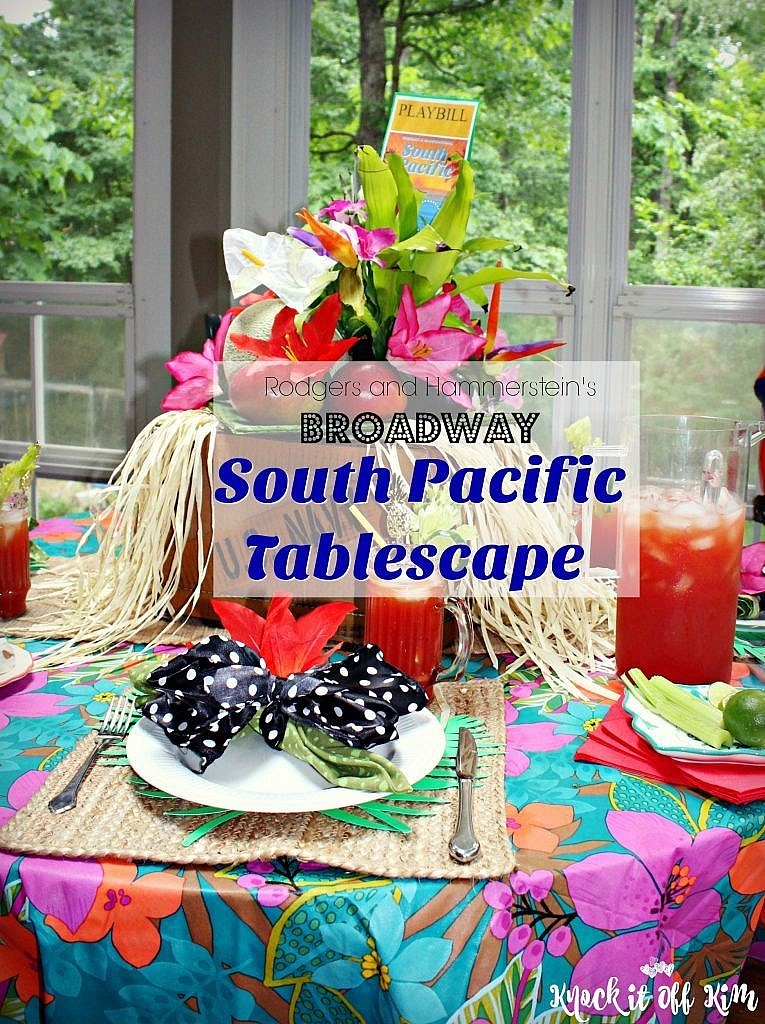 So,  you know I love a good tablescape. But it’s unlikely you know this about me; I LOVE live theater.

Here’s another bit of Knockitoffkim trivia – I’m a one-time stage actor. Yes, friends, I once held the lead role of “Snow White.”  For weeks on end, rehearsed the perfect sob, for hours and hours at a time. Believe it when I say I nailed the forest scene where the flawed but kind Woodcutter leaves Snow White in the woods. But, the pivotal moment of my performance came when I, as Snow White, returned from the dead briefly to help my beloved dwarfs, raising my arms so they could carry me off the stage. #whosaysdeadgirlsdontdance.

All about the Show Tunes

These days, I spend a lot more time watching live theater than participating in it and have seen several productions, much more than once. My favorites include Cats, Wicked, Les Miserable, and Phantom of the Opera. I also have a bucket list of those I will see someday. On it? Hamilton. Duh. Also on that list, “South Pacific.” I’ve seen “South Pacific” in every digital way possible and almost every version made, but I’ve never seen it live. Some day, I will change that, and I will experience all of the romance, danger, and excitement first hand. I’ll be front and center, belting out “Wash that Man right outta my hair” and “Some Enchanted Evening”! As for today, I’ll have to settle for bringing the Broadway production to life through this fun tablescape. I created this table setting for the Broadway Tablescape Blog Hop, hosted by the dear Chloe at Celebrate & Decorate. 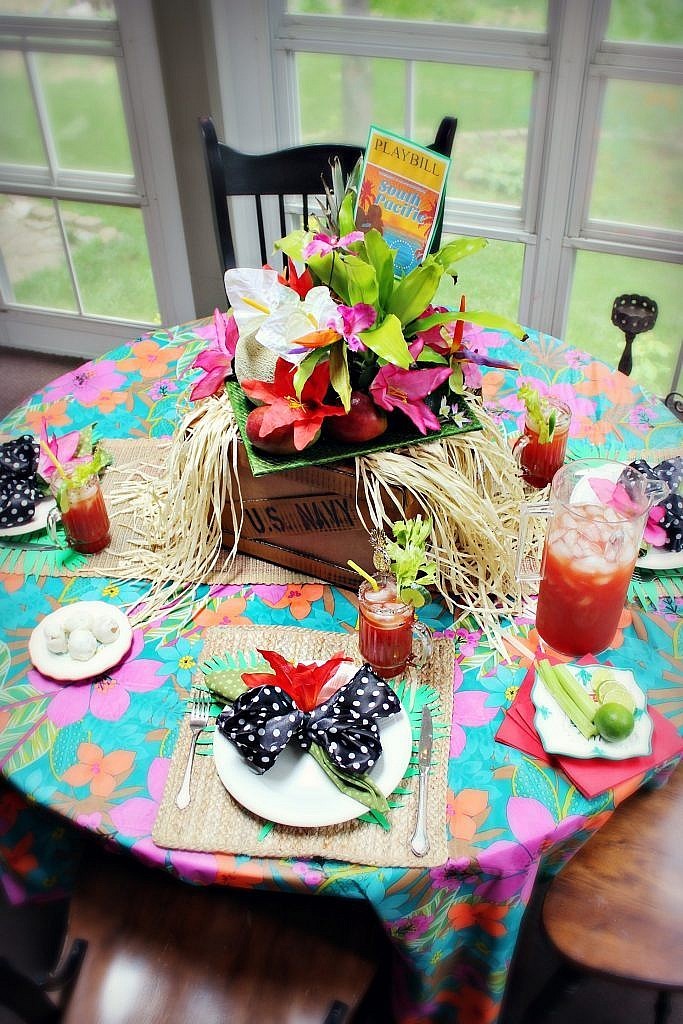 Broadway’s South Pacific for your Table

I had SO much fun putting this table setting together, showcasing my favorite moments and characters of the production and bringing the feelings and exotic setting of the play to my very own home. To help you do the same in your home, I’m sharing a free “South Pacific” Playbill printable with subscribers to my newsletter. Rest assured you can unsubscribe at any time! 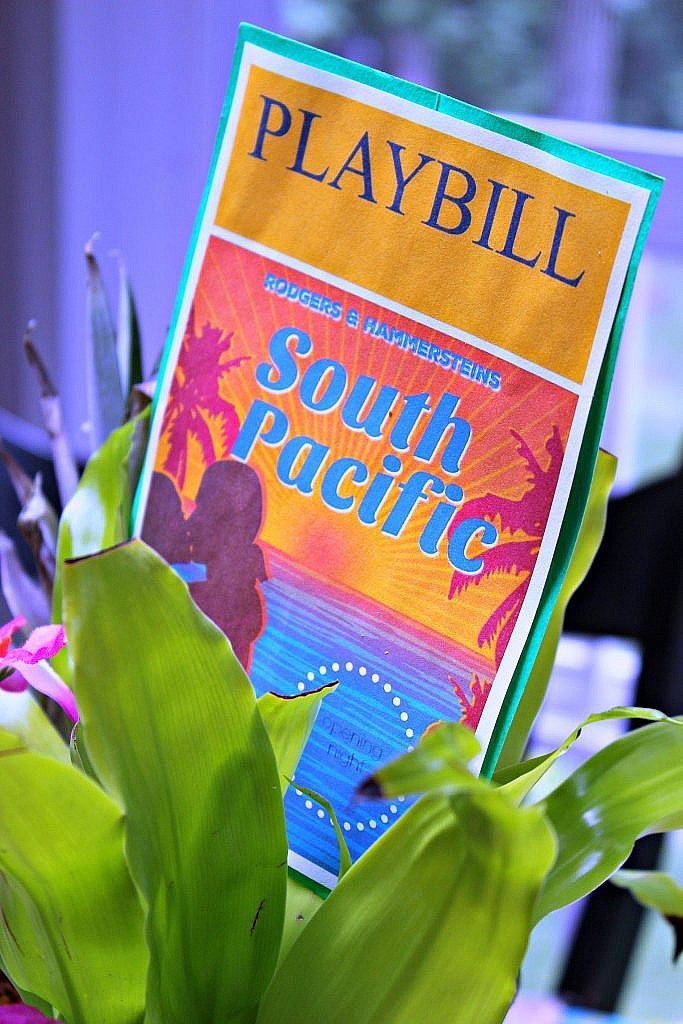 Bloody Mary (‘s are) is the Best

If you’ve never seen the play or the movie(s), first, fix that right now. Go on – watch it and come back.

Next, know it is the most romantic of love stories set in the South Pacific during World War II.  Nellie, a self-proclaimed Cockeyed Optimist and Navy nurse, falls in love with a French Plantation owner with a shady past. “South Pacific” has it all – Excitement, glamor, palm trees, racism, and a passionate love. So, so much love. If that isn’t enough, “South Pacific” has Bloody Mary. Bloody Mary is a feisty Vietnamese woman, who’s broken English is made up entirely of dialogue she’s learned from the GI’s stationed there. You can imagine how colorful and expletive her language might be automatically making her one of my favorite characters. #Iloveagoodcussword.

She’s represented in this tablescape with her namesake cocktail – the Bloody Mary and the grass skirts she sells. 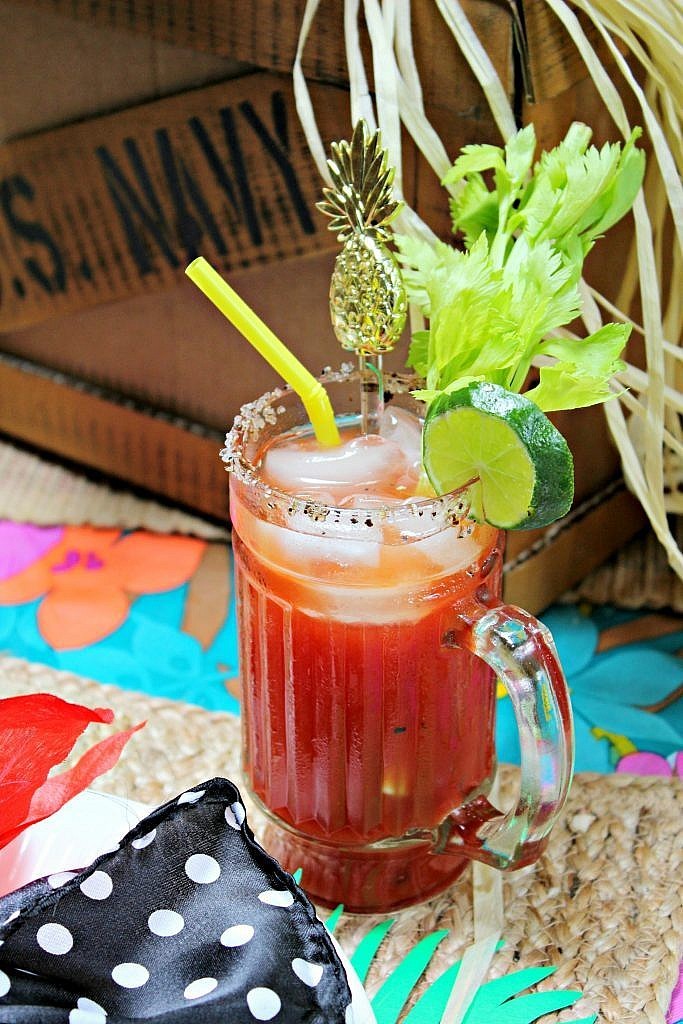 Based on a Book 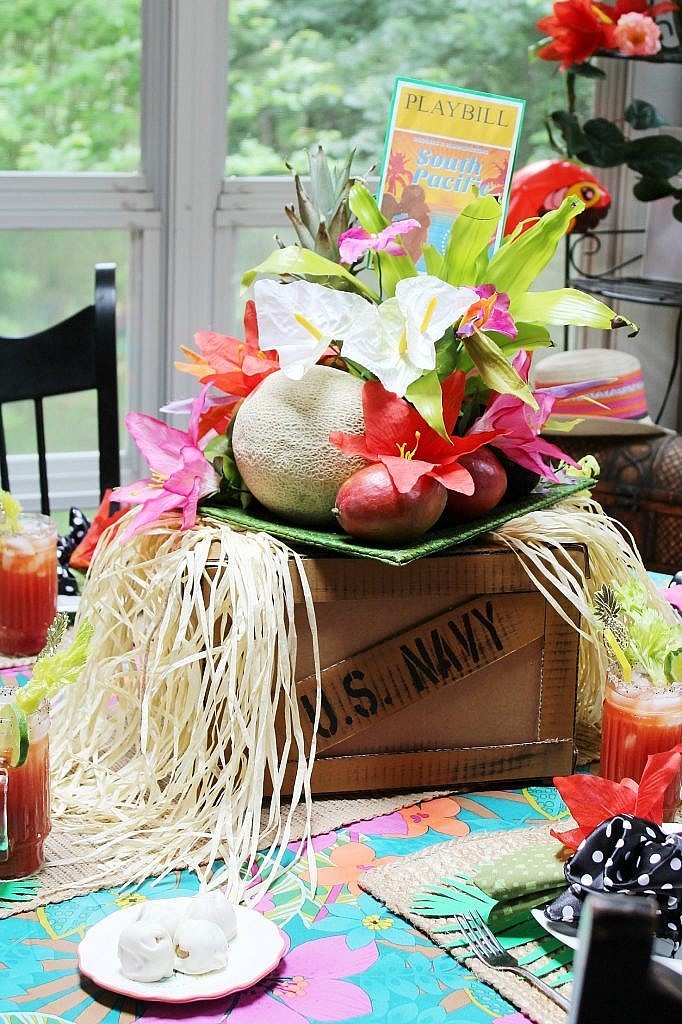 This “crate” started out life as an Amazon box. With a little added trim and a stencil a perfect prop for this tablescape is born!

Women in the 40s had the best hair accessories

“South Pacific” takes place in the 40s. Polka dots are always in style, but for some reason, the polka dot hair scarf reminds me of that era, hence the reason I added a polka dot scarf to my napkins. 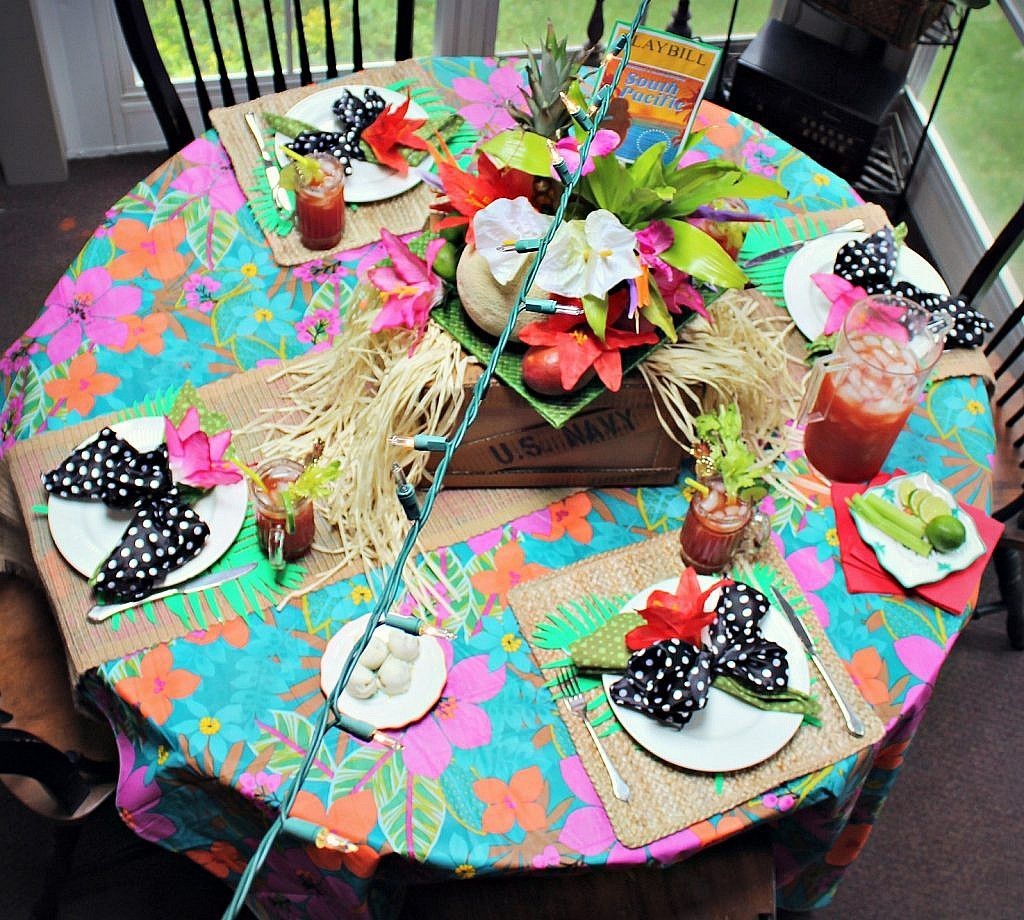 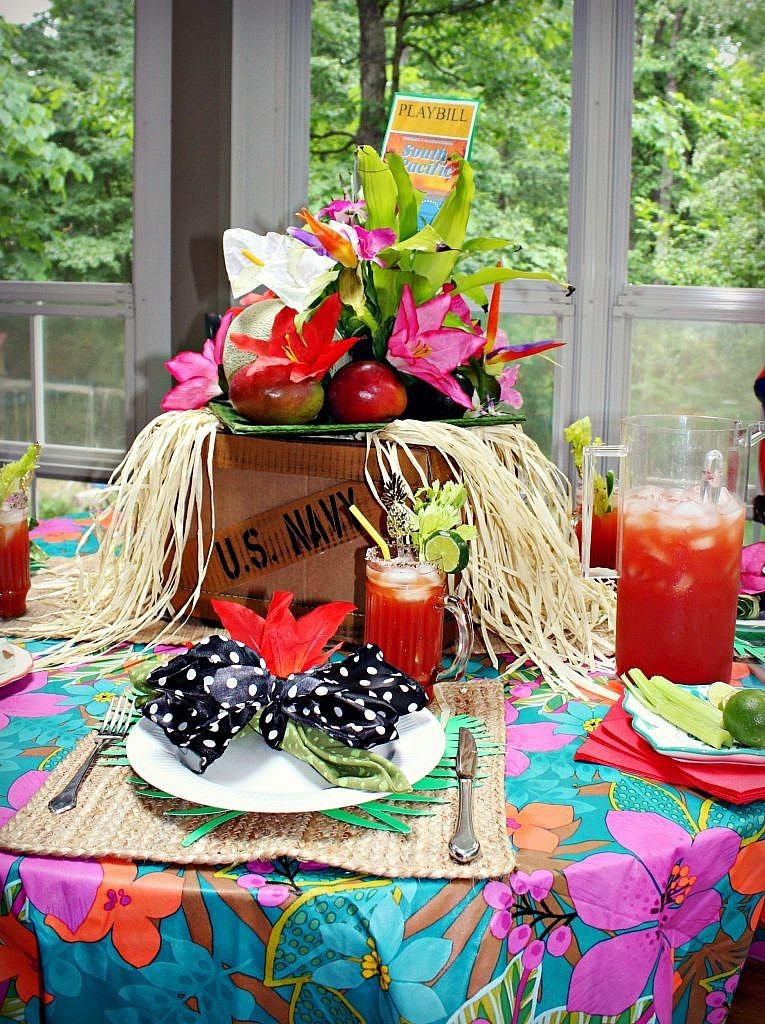 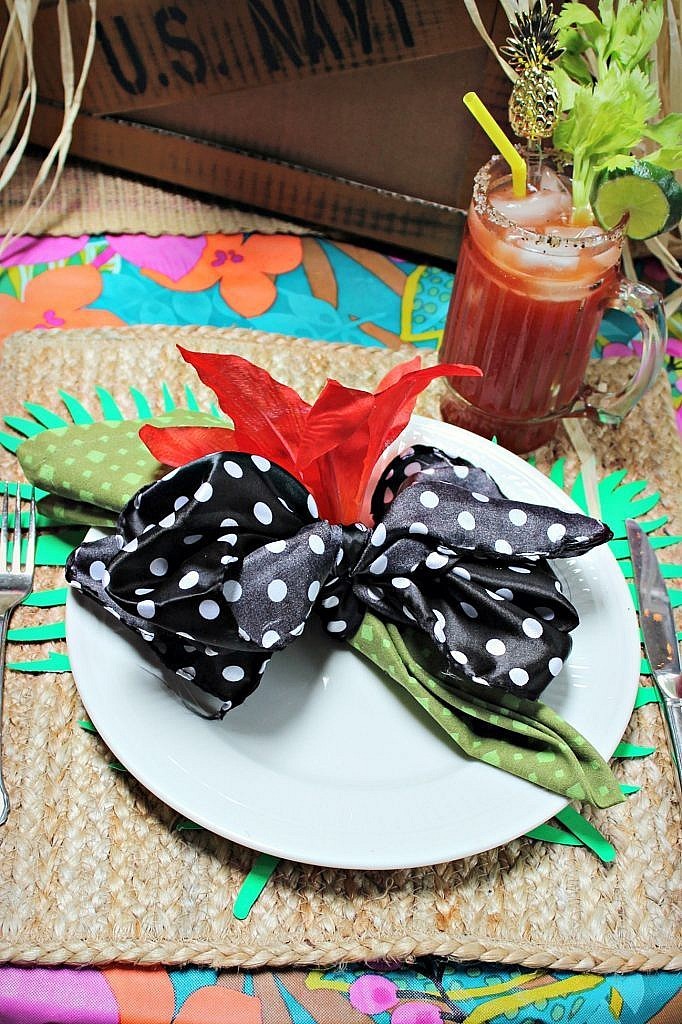 A Much-loved Play that Transcends Time and Eras 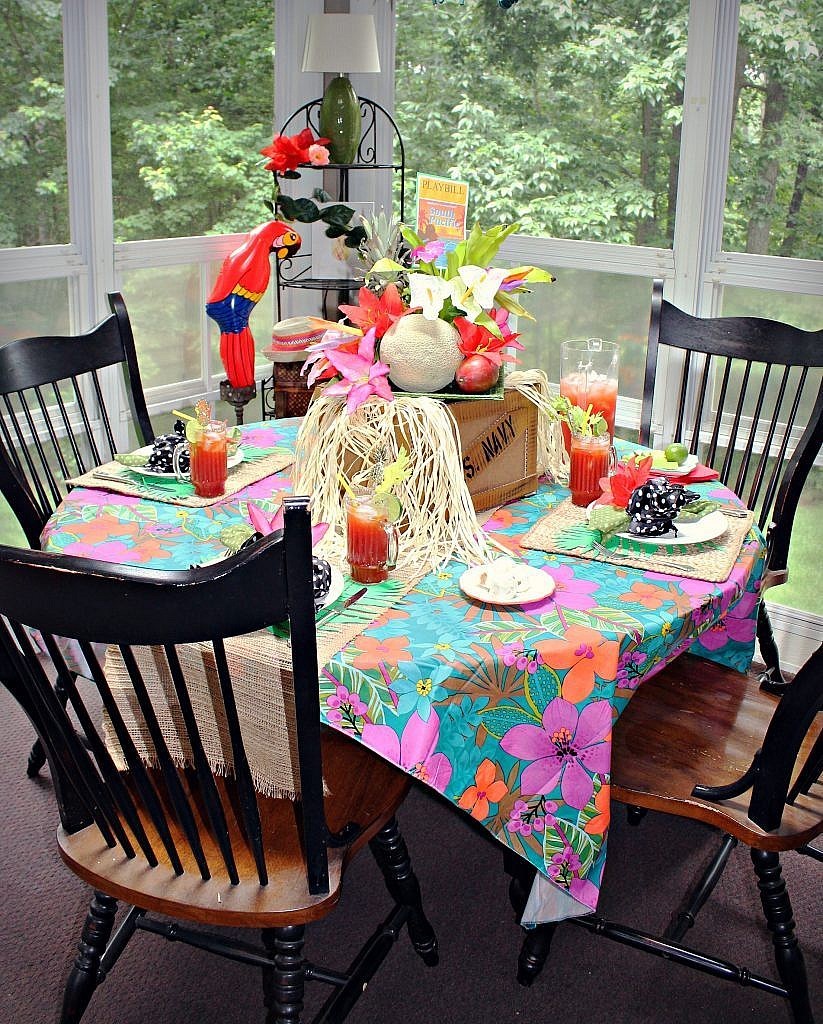 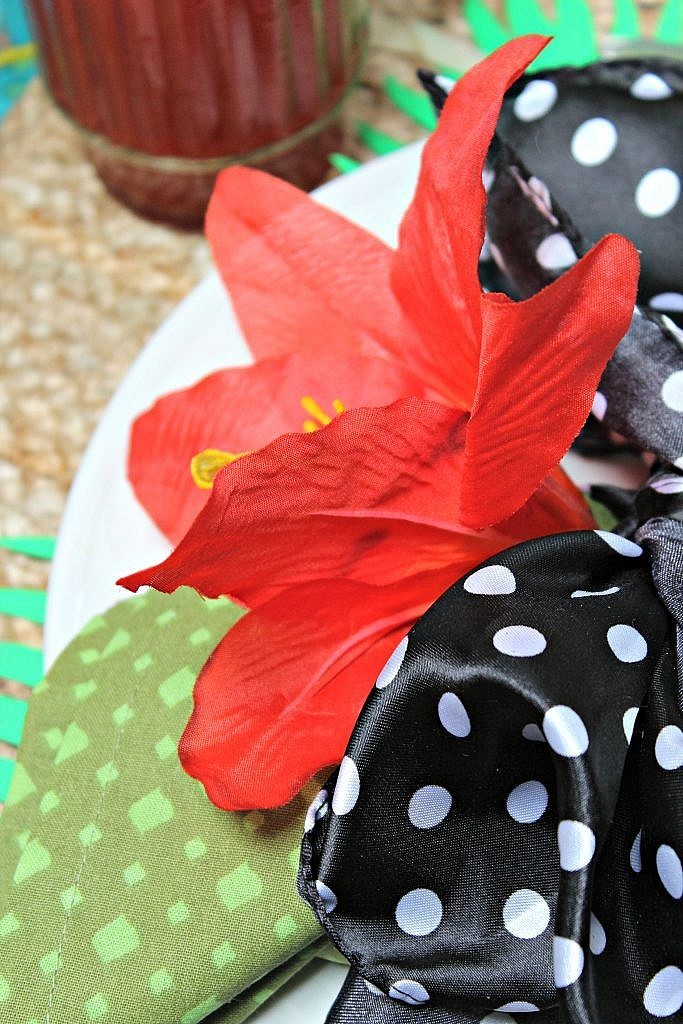 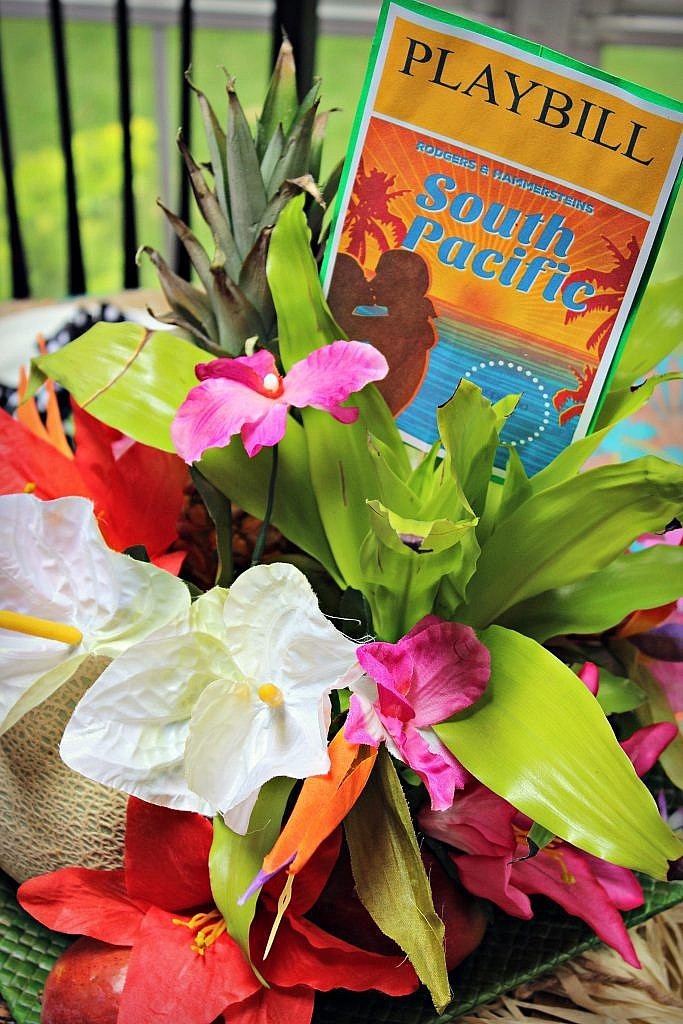 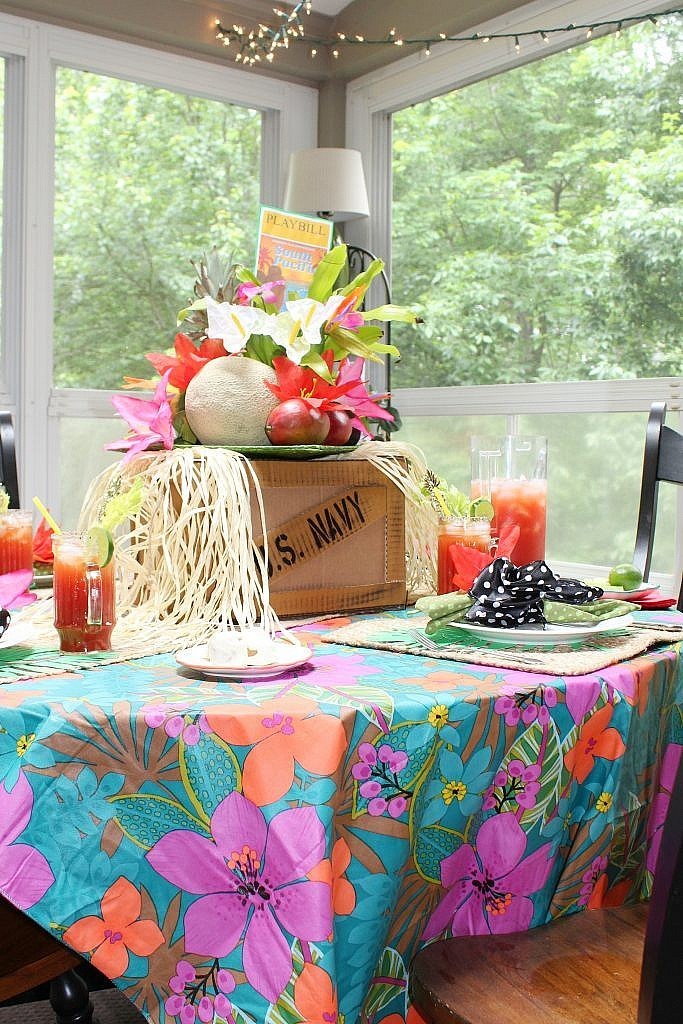 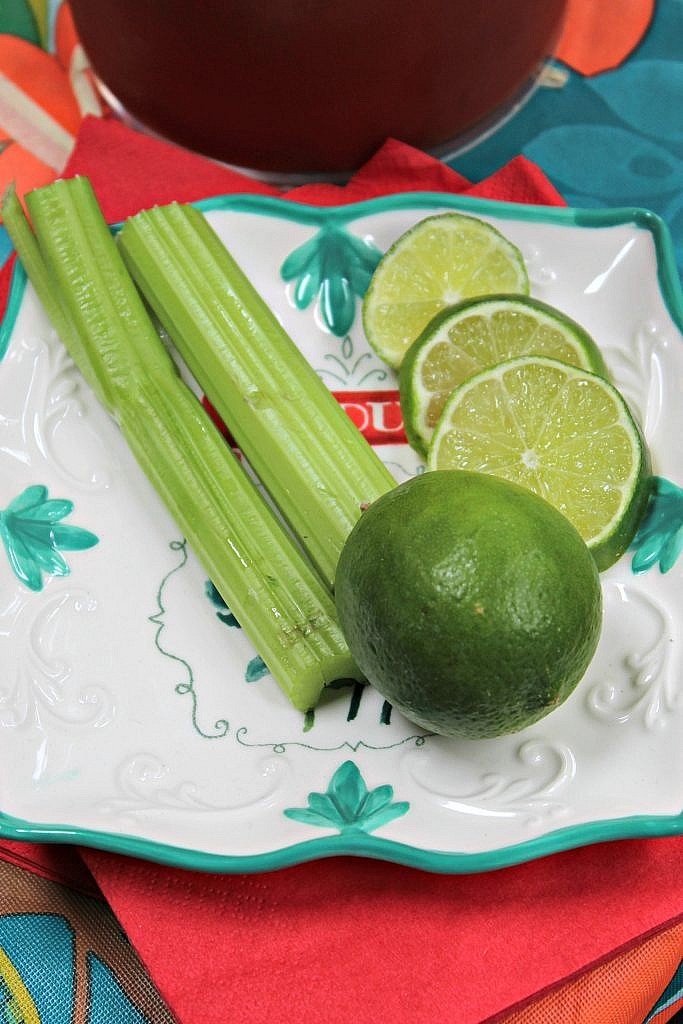 Although I won’t be crossing “South Pacific” off my bucket list anytime soon, I’ll hold out hope that someday there will be another revival. In the meantime, there’s always Hamilton.. and my acting career! 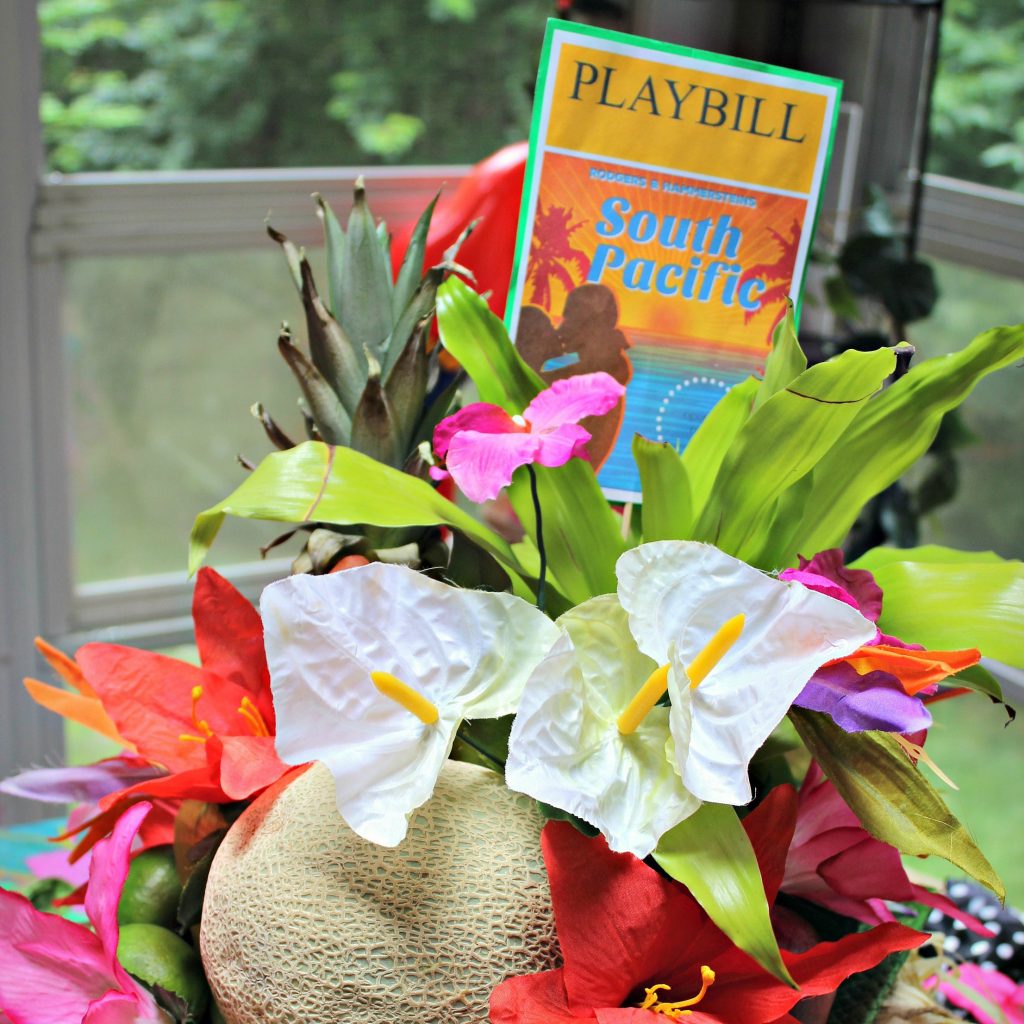 Huge thanks to Chloe for including me in this hop. Be sure to check back every day this week as we gear up for the upcoming Tony Awards. Today, be sure to check out tablescapes from Everyday Living and Up To Date Interiors. And, don’t forget your free Playbill Printable! 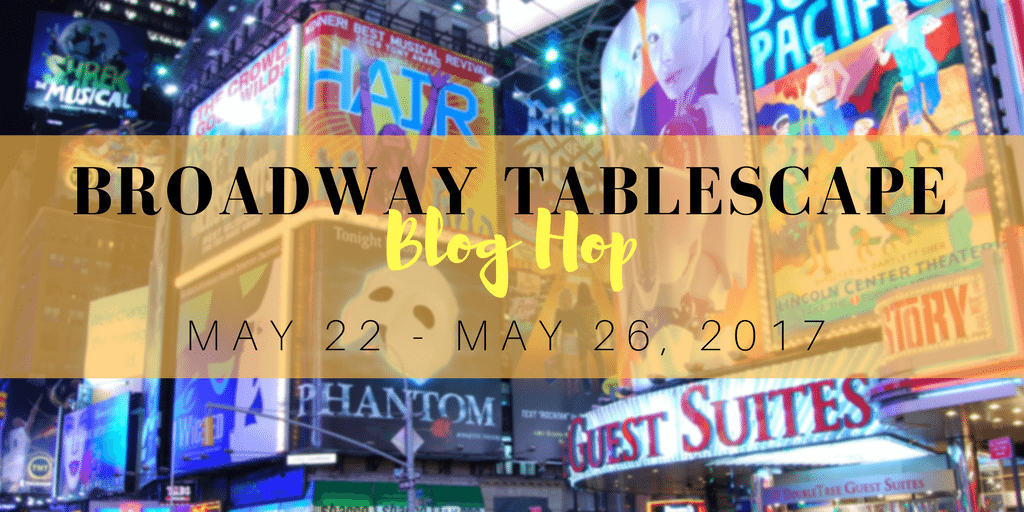 If you’ve liked this post, consider following me on Social Media or subscribing to make sure you don’t miss anything.