Capiz shell chandeliers can cost a fortune, but this DIY chandelier uses a faux Capiz shell for the same look at a fraction of the cost – less than $20! Talk about getting the look for less!

If you’re new here, my current project room – at least the one that has most of my focus – is my daughter’s bedroom. It’s a small, cramped room, in need of a makeover.  I have a lengthy list of projects to get through before I can call it finished, of which I’d only crossed off one item – the rearranging part, at least until today! 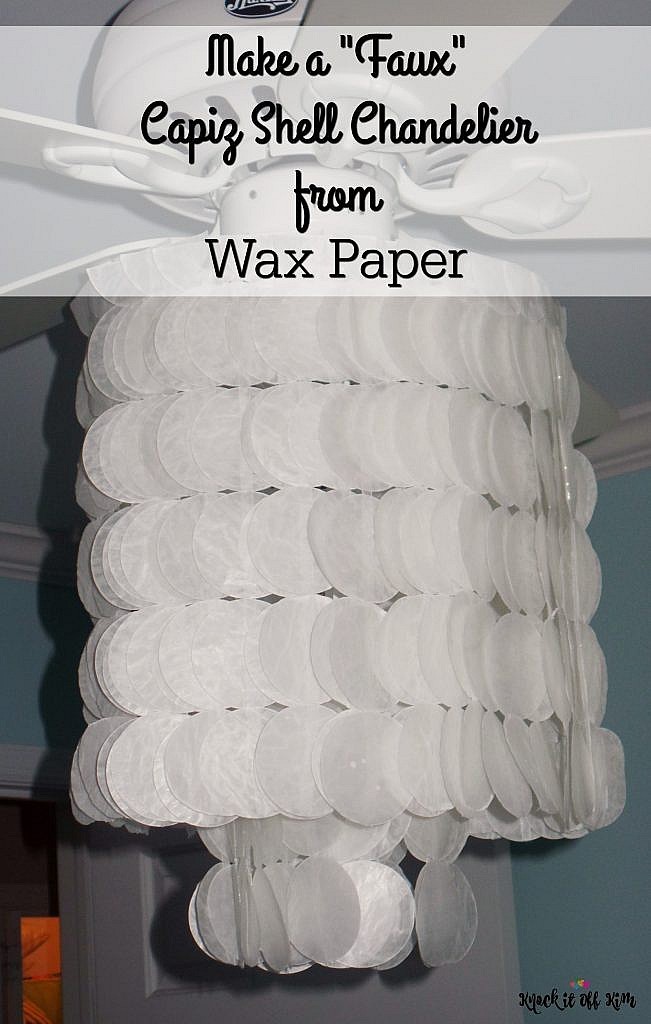 Unfortunately, fans are an absolute must in our house, which limits the fixtures we can buy.. at least within our budget. The present light was made using a large barrel shade turned upside down, but it lacked that certain.. oomph. 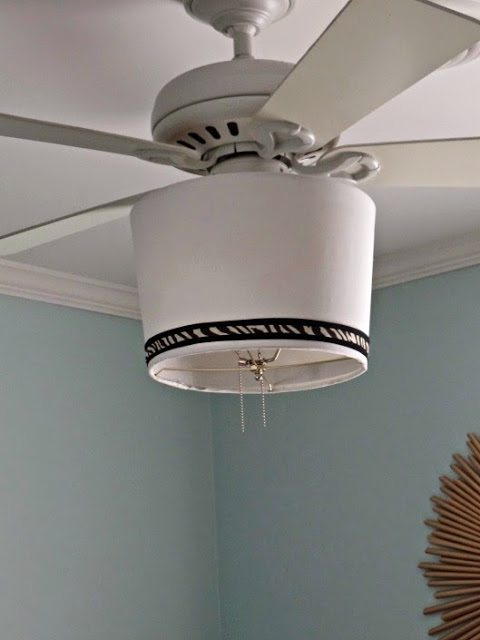 On my travels, I came across one at my other home World Market. Although the price wasn’t too bad, it was the wrong color, as well as it didn’t work with the fan. Plan B went into effect.. or, should I say. The Plan B that I suddenly came up with went into effect. Or rather, Plan B found itself in a fantastic tutorial at Fabulous Fashions for Sensible Style,  who promised I could make a Faux Capiz Shell DIY Chandelier for under $15.. and.. they were right!

I’m not going to do a full tutorial here – theirs was well written, but I’ll give you a brief overview of what I did to attach it to my fan rather than a regular ceiling fixture.

HOW TO MAKE A DIY CHANDELIER WITH FAUX CAPIZ SHELL

1. Strip the lamp shade of it’s cover down to the wire. 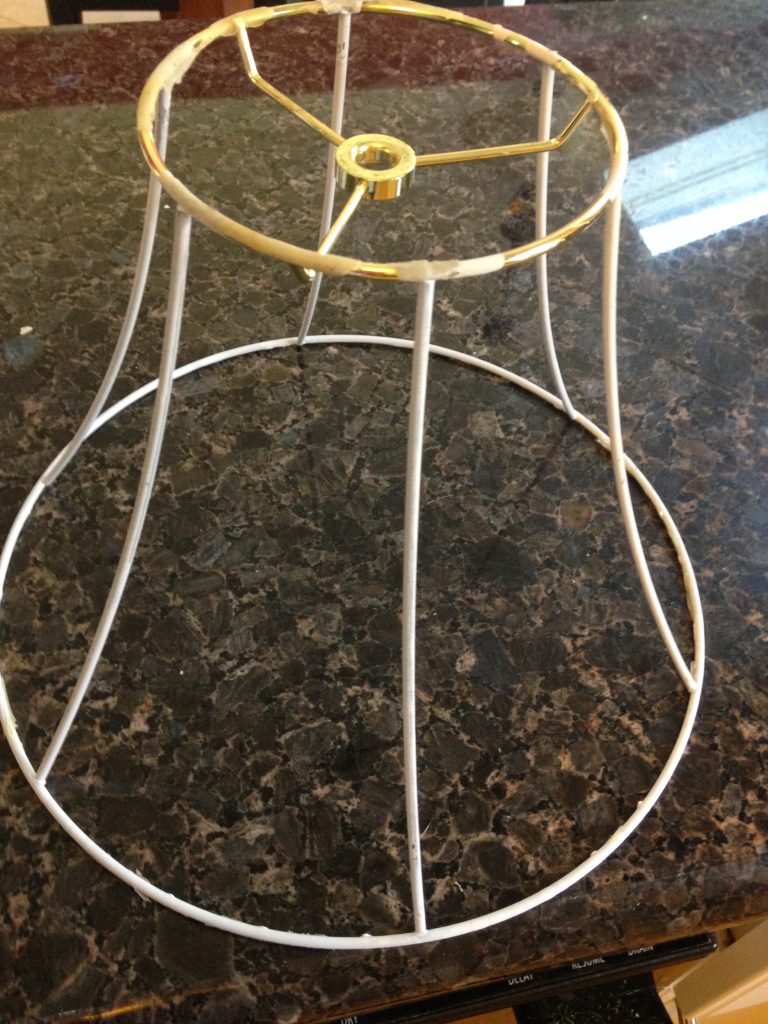 2. Layer 5 sheets of 12″x12″ wax paper and fuse them together by placing the layers between two thin towels, and ironing them with a very hot iron.

3. When the layers are cool, use a 2.5″ paper cutter to cut out as many circles as will fit on a sheet.  You’ll need about 300 circles for this project. These will be your “shells.” 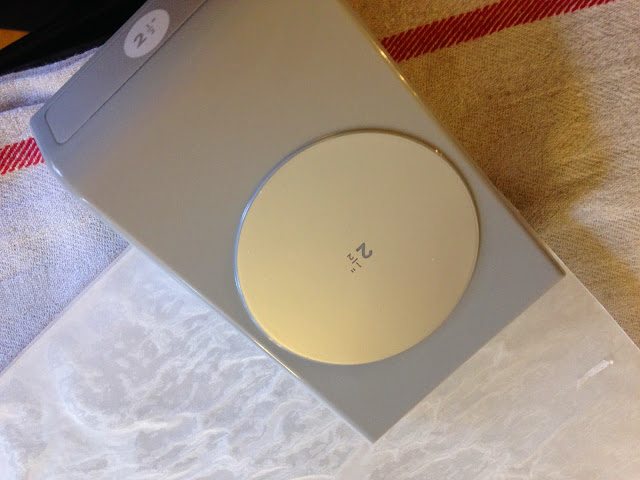 Be sure your cutters are extremely sharp. After trying three different punches – Fiskar, an EK Success, and a Michael’s brand cutter,  I recommend the EK Success Cutter – Surprisingly, the reviews on Amazon are mixed for this, but by far, this was the winner of all the ones I tried. The Fiskar wouldn’t get through the paper at all, while Michael’s brand only partially cut, but the EK Success cut through consistently throughout the project.

5. Glue five “shells” to the 13″ lengths of organza ribbon, starting 1 1/2″ from one end of the ribbon (this becomes the “top”) butting each circle against the next as you go down the length.

6. Glue three “shells” to the 9″ lengths of organza ribbon, starting 1 1/2″ from one end of the ribbon (this becomes the “top”) butting each circle against the next as you go down the length. 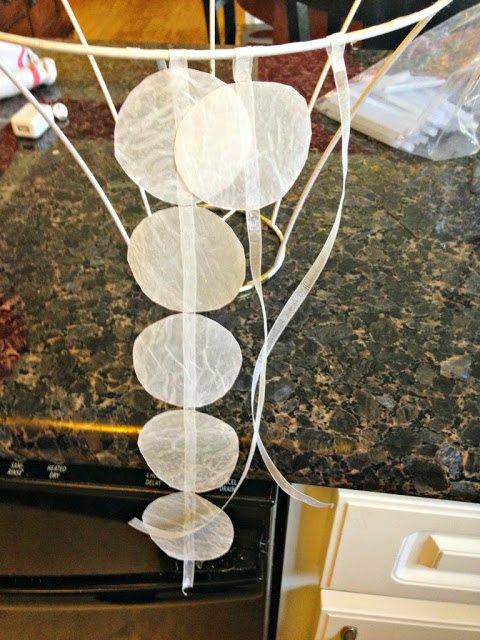 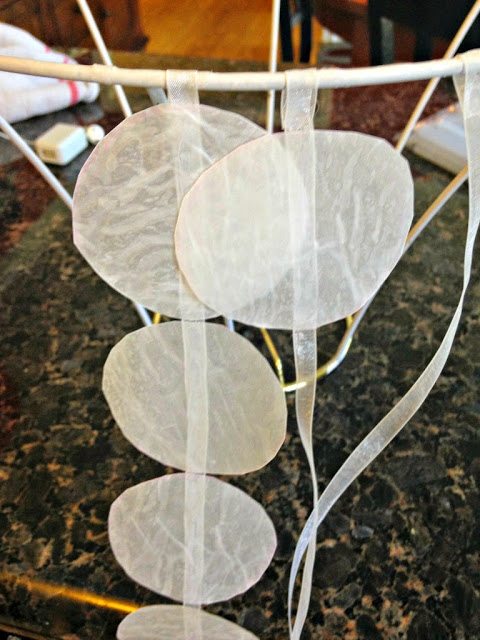 ADD THE STRANDS TO YOUR FRAME

7. Turn the lampshade upside down. The widest end of the shade becomes the top.

8. Starting on the bottom – not what I did, but the smarter way to go – fold the top 1″ of ribbon strand over the wire and secure it with a dot of hot glue. Be sure to press both sides of the fold together to ensure the glue dries securely.  I used ten strands per lamp shade section. On the top there were six, on the bottom of the frame, there were still six sections, but some were smaller than others. On the narrower sections, I attached three 8″ strands, on the wider sections, five. 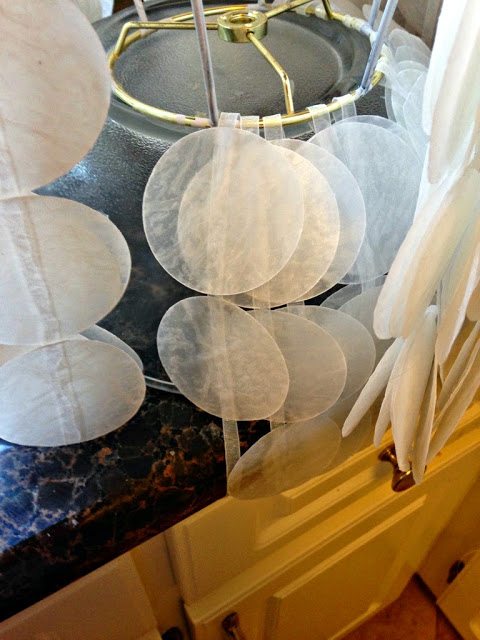 9. Trim any remaining ribbon along the bottom of each strand up to the lower edge of the last “shell” in a row.

10. To give the top edge more of a finished look, cut the remaining circles in half, and glue them just slightly above the wire line on the top, with the cut edge facing up.

If you’re attaching the shade to a fan, and your fan is relatively new, try this: Thread a lamp harp – the thingy that you attach to your lamp to hang a shade through the holes reserved for the light and speed chains. Bend them to secure them to the fan base. I added a large glob spot of hot glue.. because it’s almost like duct tape.. good for everything.. over the holes to give it a bit more stability. It worked like a champ. 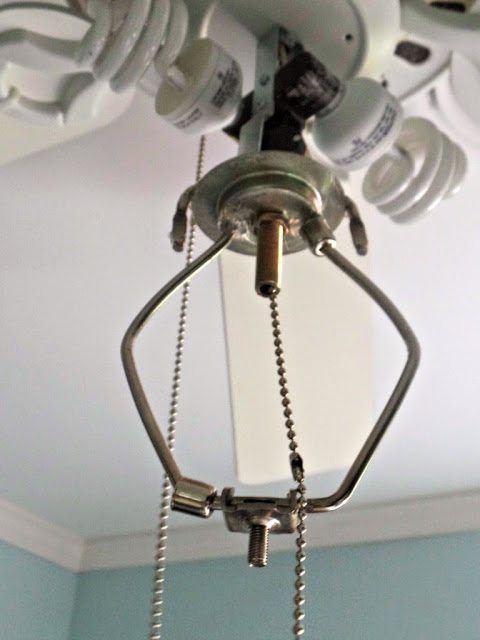 Now, you can attach your shade to the harp. Here is what it looks from the underside. 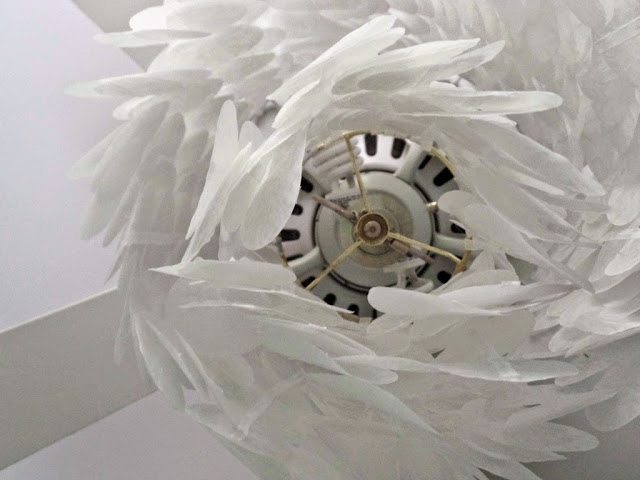 And here it is in the room. 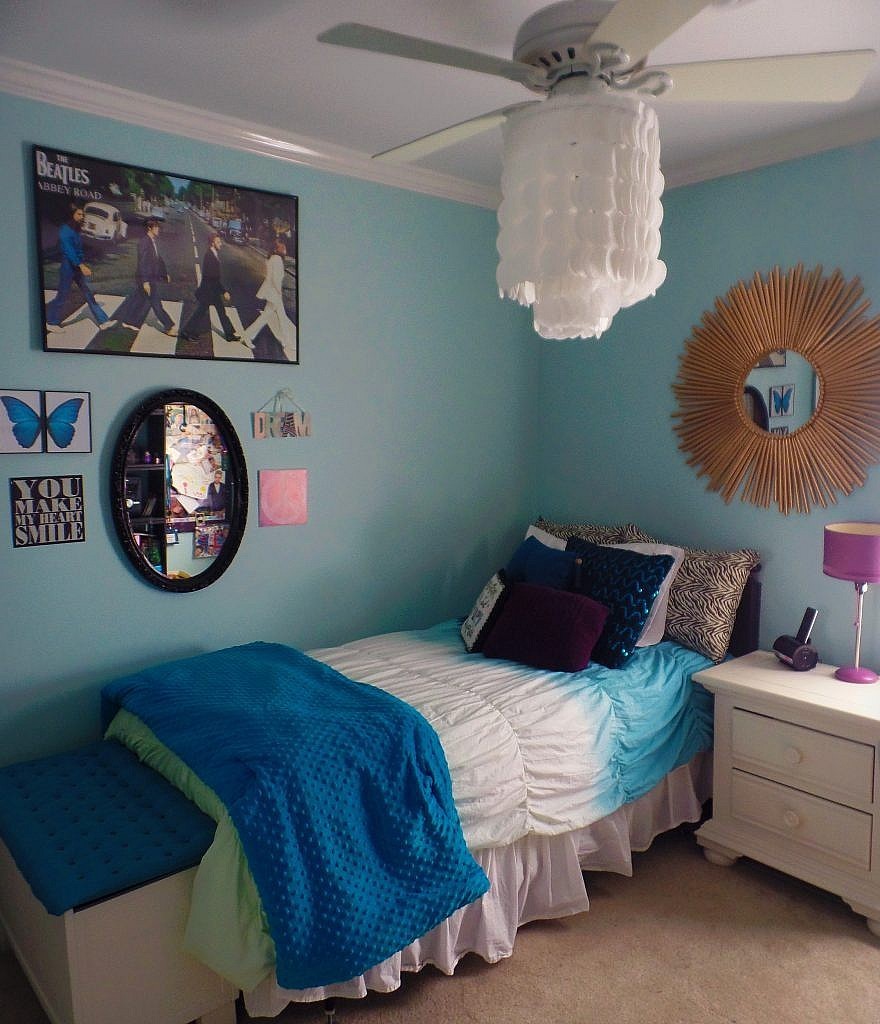 Because of the way and how low the shade sits, we can still use the fan – at least on medium, which is as high as we ever go anyway.

Here it is lit up. I love how the light shines through and shows each “shell.” 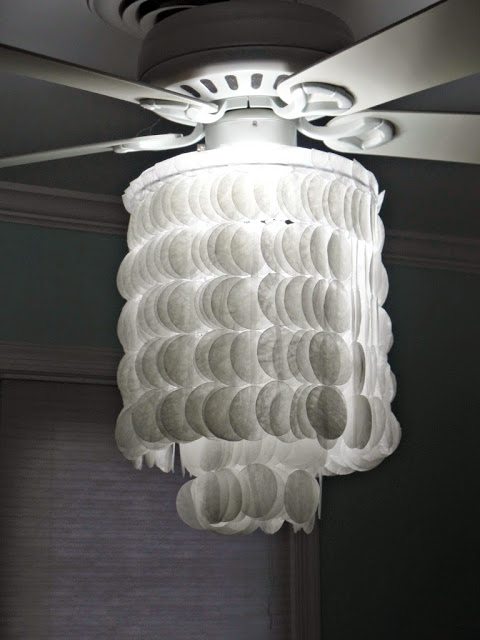 So, this one is a wrap. New, chic and trendy Faux Capiz Shell DIY Chandelier Lampshade, for under $20.. check! Huge thanks to Fabulous Fashions for Sensible Style for such a FANTASTIC tutorial!

As always, thanks for following along on these crazy adventures. It means so much! 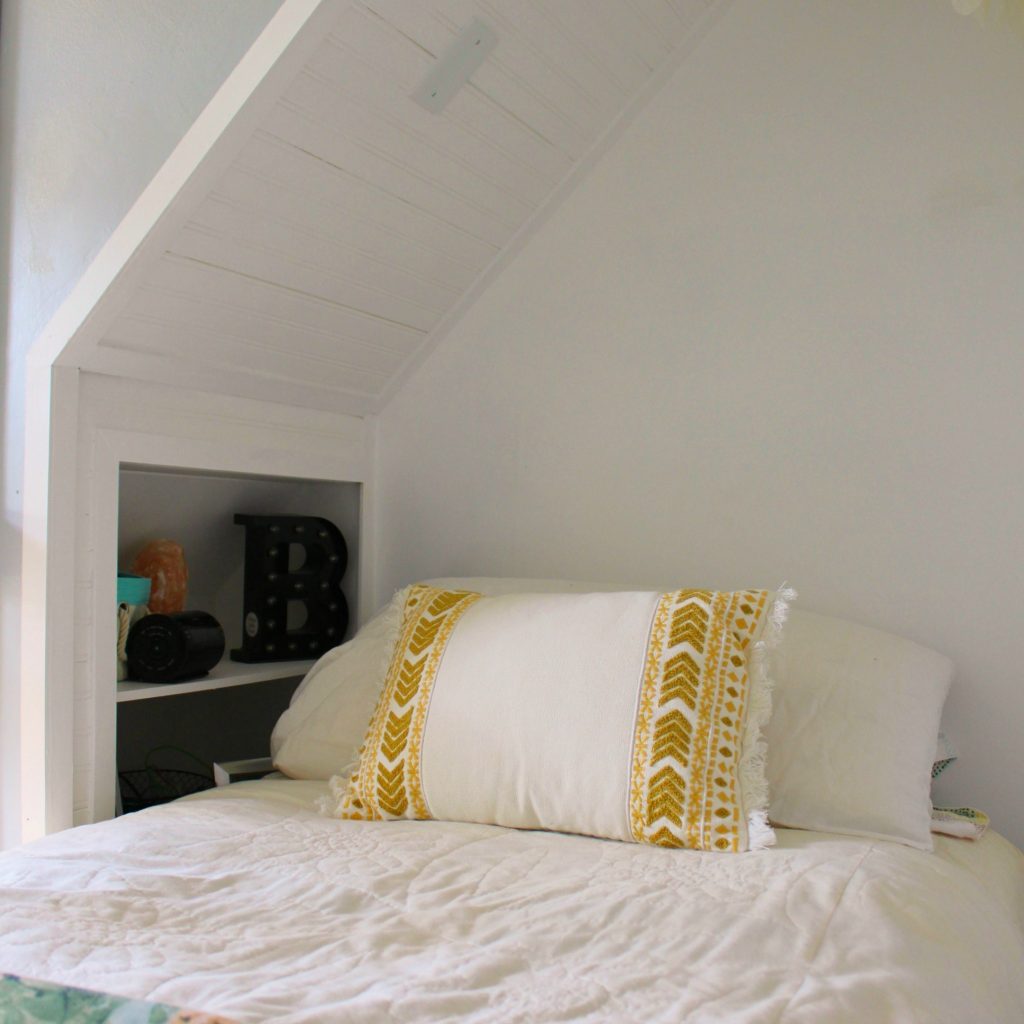 Build a Bed Nook in Your Closet 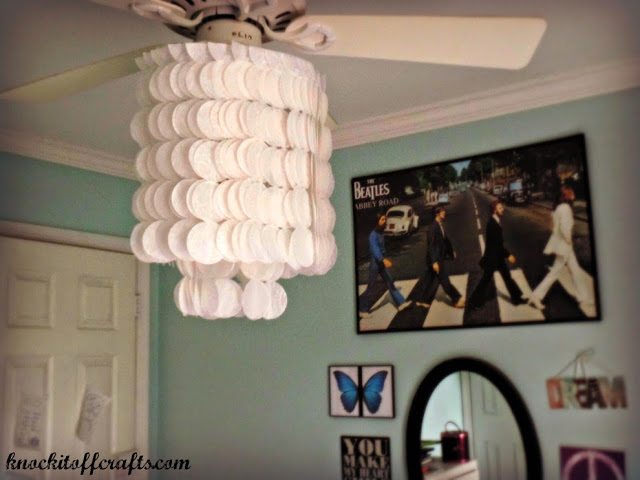 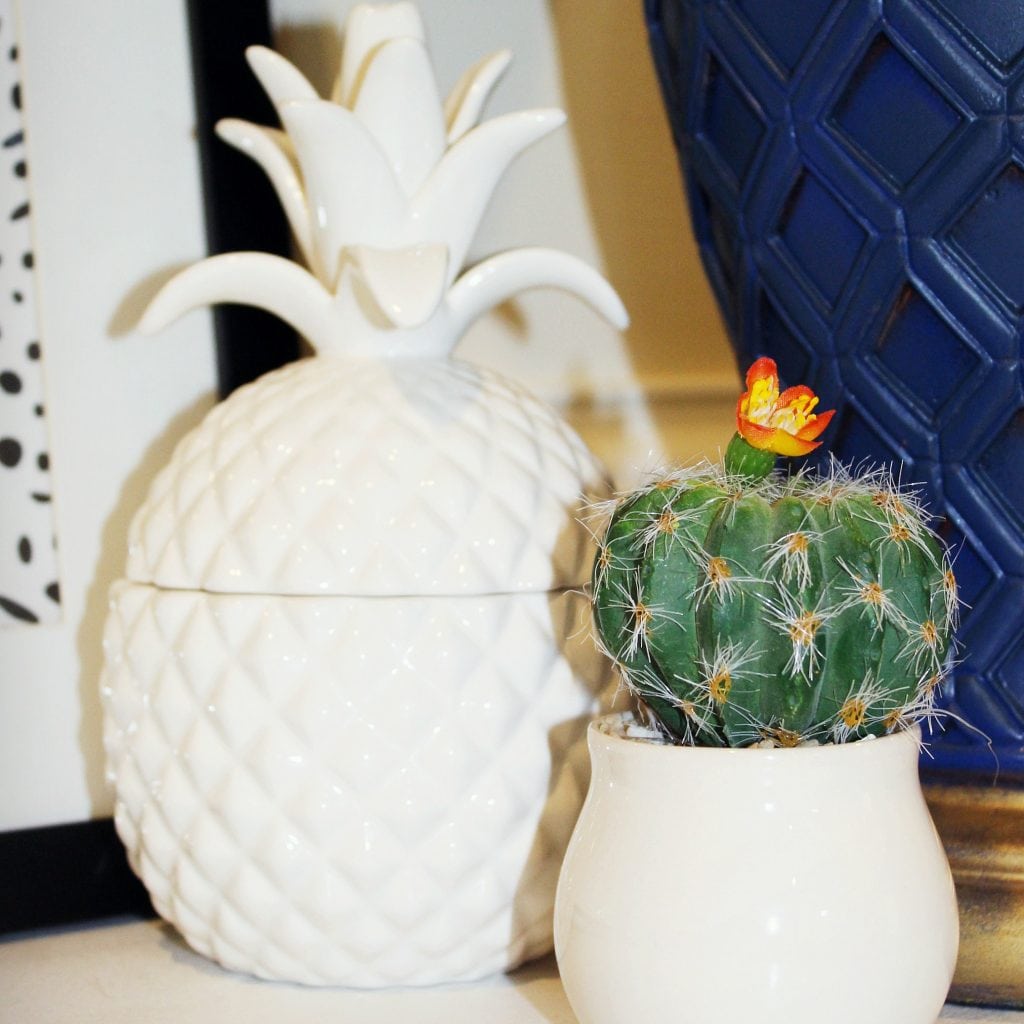 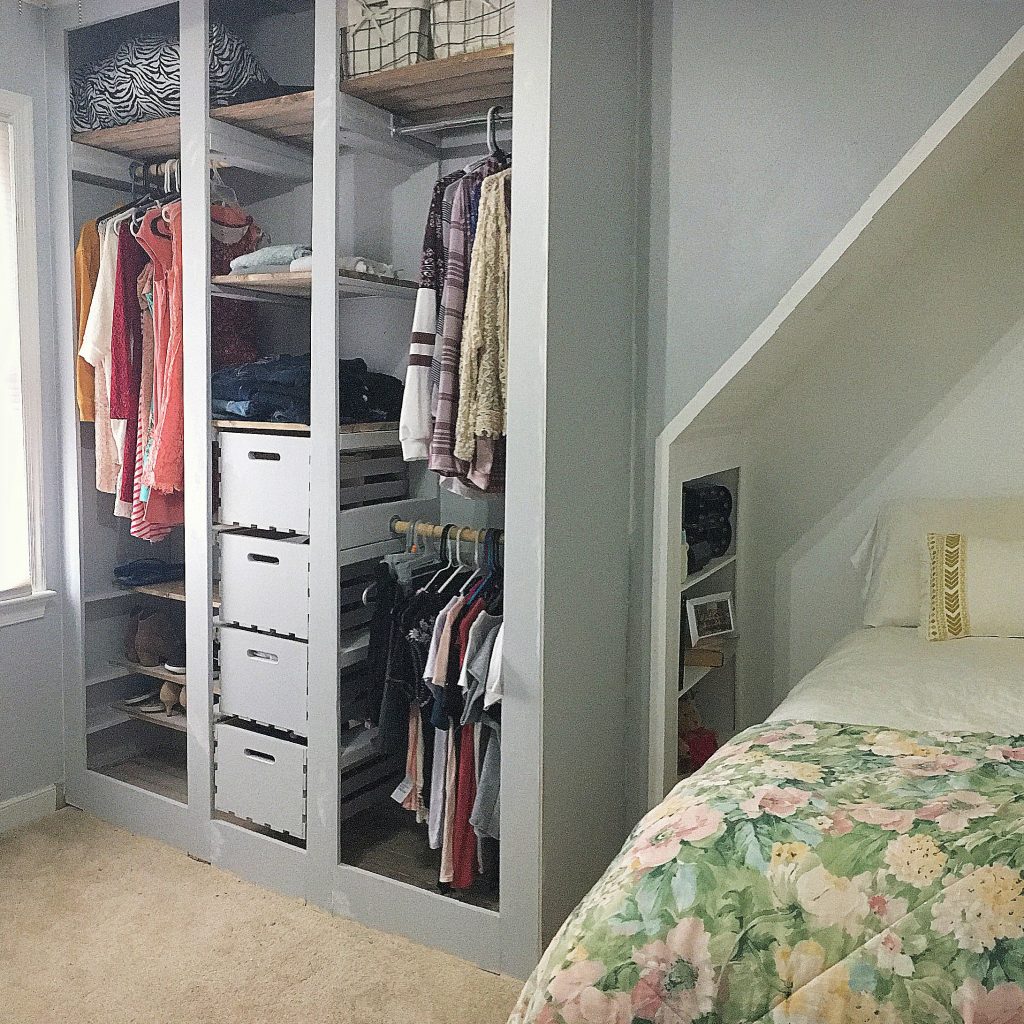 Build a Built-in Wardrobe From Scratch 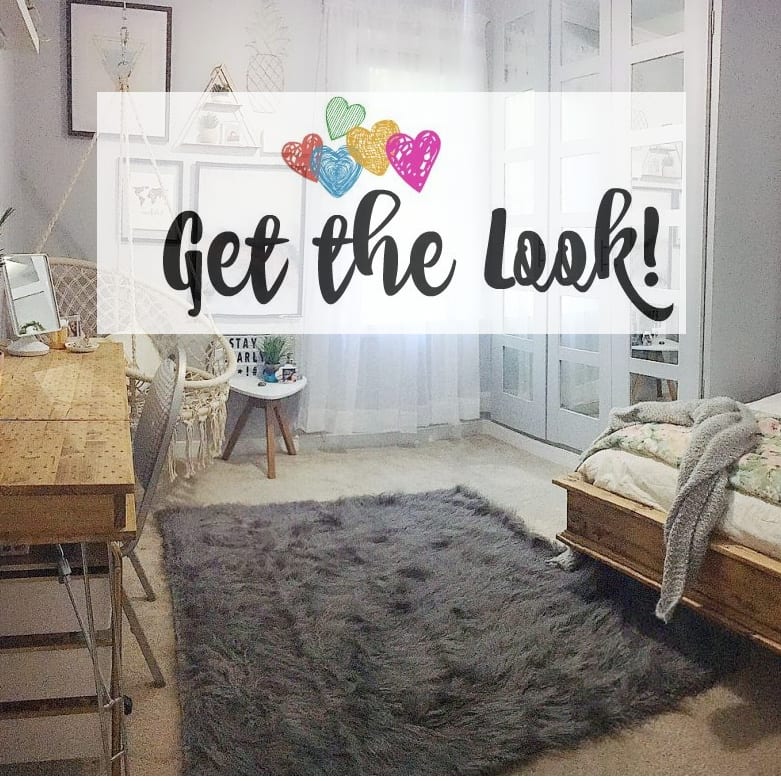 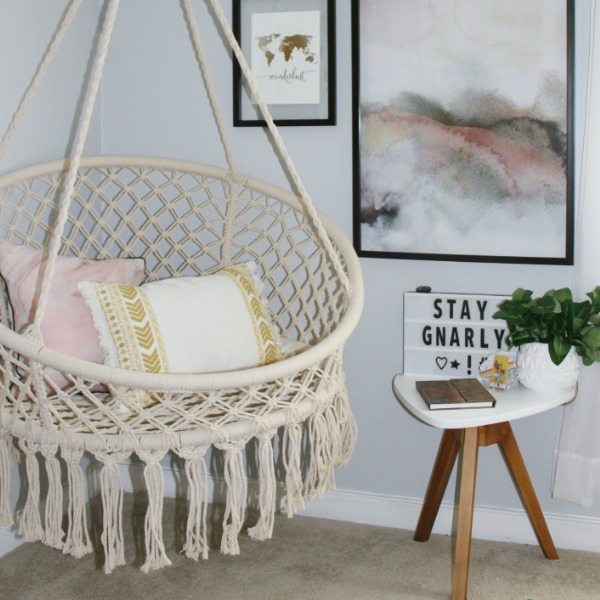 If you like this DIY Capiz Shell Chandelier project, I’d appreciate your sharing it with others by pinning it! 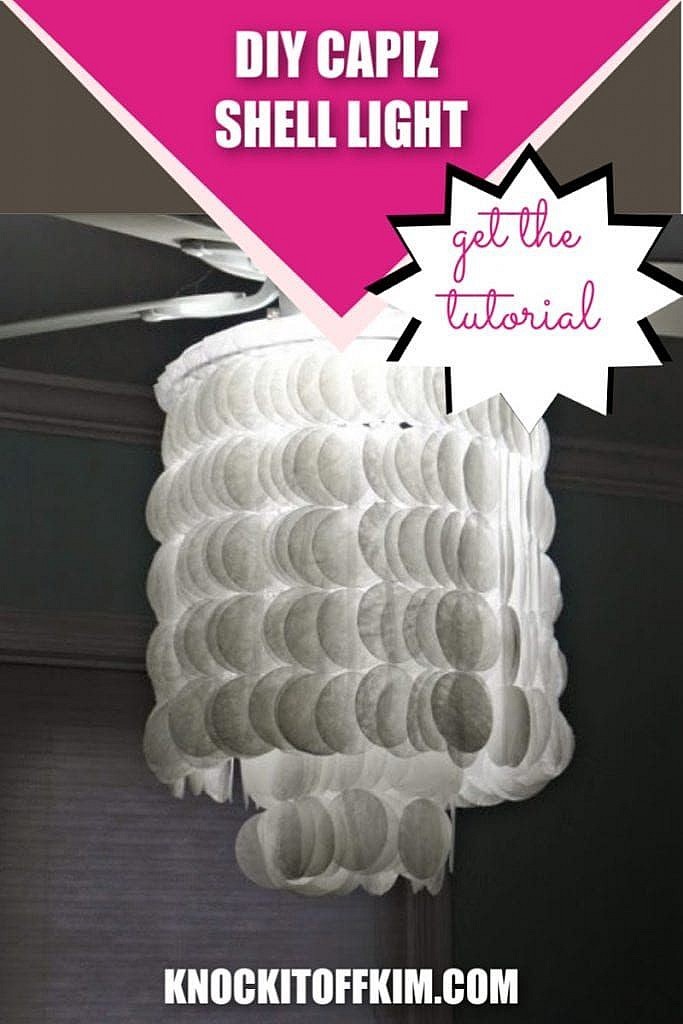